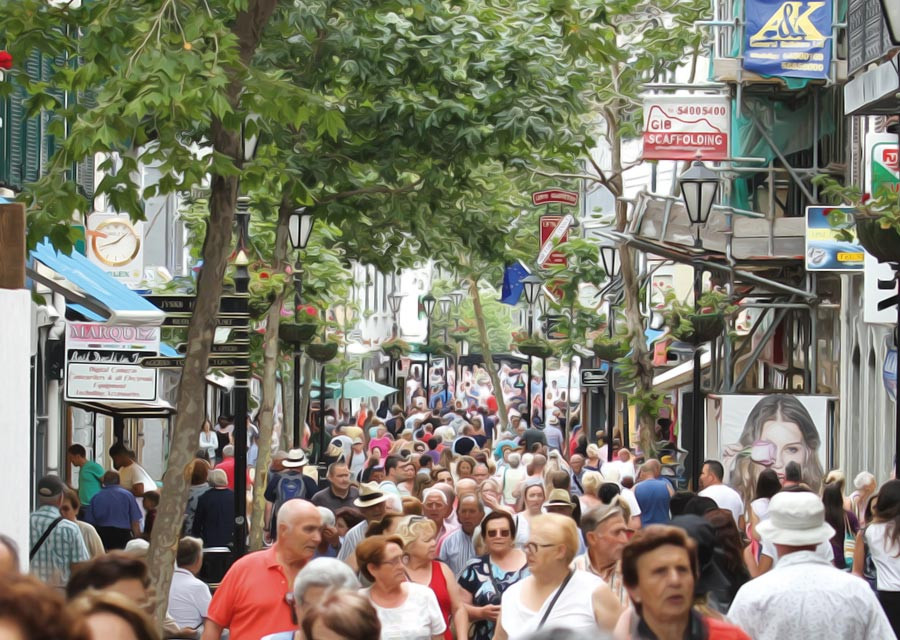 The decline of high street shopping has long been on the cards, predating the pandemic and Brexit.

Competition from out-of-town shopping centres, like that at Palmones and La Cañada near Gibraltar, and online sales already had the high street against the ropes, but the pandemic, and the speed with which people have adapted to the so-called “new normal” in terms of lockdowns and home deliveries, was the last thing that this sector needed and has accelerated the well reduction in high street sales.

By the third quarter of 2020, Amazon tripled its profits amid a 37% increase in earnings while famous high street retail stores prepared for mass redundancies and closures.

Within weeks of the WHO declaring of the pandemic, premium values in Gibraltar’s Main Street disappeared into thin air and there is now even talk of reverse premiums, i.e., payments made by the seller to the buyer to allow the former to get out of its leasehold obligations.

Of course, the law of contract prevents tenants from just walking away before the end of their terms, but, already throughout the street, there are empty shops which were once highly sought after.

“The old paradigms are no longer valid. Landlords and tenants must recognise the new situation and that the success of one is the success of both. Sometimes, there is no point in standing on the strict letter of leases signed in a commercial reality that no longer exists.”

“Our firm, working with Gibraltar’s top valuers, focusses on putting together arrangements which can ensure the survival of businesses whose client base has dissipated and safeguards landlords from having to carry empty premises and to tide them over until things improve, as I am sure they will.”

Benyunes says that this method has already worked in several cases that Charles Gomez & Co is handling:

“Initially, both sides would square up to each other, but we have often been able to convince the parties that the only way forward is cooperation and understanding in what is, after all, a symbiotic relationship. We aim for a win-win result”.

The business community in Gibraltar is mobilising to reinvent the sector in a way that can return it to profitability in these extraordinary times.

According to the Firm: “Historically, Gibraltar has weathered many such “extraordinary times”, but that is no cause for complacency and the reduction of visitors from 10 million to hardly any is not something that can be magicked away”.

That said, enterprising minds will find new avenues for commerce and profit and the questions which everyone is asking are “how?” and “what?”.

Commercial confidentiality means that there is a lot of imaginative work being carried out behind the scenes, which will be announced in due course as and when entrepreneurs feel it safe to do so.

Daniel Benyunes said: “We must wait to see what the Gibraltarian entrepreneurial spirit comes up with and in the interim, it seems that some elements of our traditional business model must be reviewed urgently”.

“The first to go must be the habit of piling on bureaucratic requirements on businesses as a means of creating jobs in the public sector.”

“In 2018, the Gibraltar Federation of Small Business obtained a ‘warts and all’ report from a specialist retail analyst called Kerching Retail, which highlighted urgent areas for improvement in Main Street in terms of presentation and customer care (link).”

“Those conclusions are now more important than ever in ensuring that Gibraltar retains a competitive edge.”

“The Main Street is fighting for its commercial life and can be saved only by a complete paradigm shift, away from the complacency of the last 30 years to be replaced by a more proactive, refined and organised approach to the business of business where everyone in Gibraltar is called upon to be lean and mean and fleet of foot”, says Benyunes who can be contacted at daniel@gomezco.gi.

Charles Gomez & Co has been advising on commercial leases since 1982.

This is an excerpt from a piece published in the online news and views platform reachextra.com in March 2020.